Horses for courses - and spawns for Harbingers.

Hi guys, a bit of a progress update.

I've been using a Harbinger of Decay for many a game, using my old rotfly riding champion conversion - but since the debut of the Lord of Afflictions, it seems confusing to have two very different characters both riding flys.

While the original model is probably considered a modern classic: 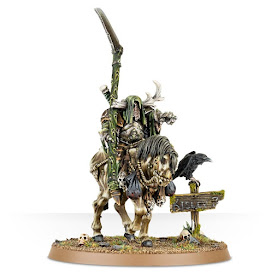 ... I have some issues with it; first of all, it's small. Way to small. It originates from the old Warhammer Fantasy, and doesn't scale well at all with the new and bigger scale of AoS. Secondly, it is finecast. I hate finecast. Thirdly, horses seem exceptionally boring to me, in a setting of high fantasy, such as AoS. Therefore, I wanted to make my own, new and improved, Harbinger of Decay.

A bit of a forestory; some years ago, I stumbled upon an amazingly talented sculptor, namely Jason Hendricks; he has sculpted some insanely cool models, even some of the prototypes for the Warjacks from Warmachine. Especially one miniature enamoured me; The Nightmare Thing:

I stumbled upon someone selling it on a facebook about a year ago, and I promptly bought it, without knowing what to use it for. Upon receiving it, I found it really cool, but also too big to be used as a regular spawn, and some of the details got a bit lost in the casting material (I call it restic - used for lots of board games - apparently cheap, and also quite horrible to work with - cut, scrape, sand - it's equally bad for everything).

Anyway, it sat in a box, until two nights ago, when I was pondering what to do with my Harbinger, and a light went off; I hurried to my desk, got out the nightmare thing, and started messing around with parts: 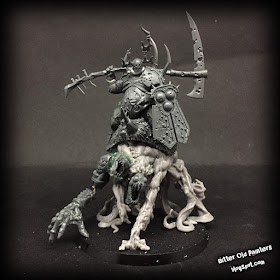 I've replaced the head with to heads (one an upside down pink horror mouth, the other an upside down Blight King fly head, with the lower jaw from a pink horror added), and a Stone Troll arm, because I felt it was missing a bit of ye old GW aesthetic. The saddle is from the Maggoth lord (which oddly basically popped into place, as if made for it), and the torso is from the Pusgoyle Blightlords.

I'm really liking it, although I'm still on the fence about the scythe; one, it just seems like such an obvious choice, and two, the 1" range of it really doesn't suggest scythe to me - any suggestions?

I've gotten a bit further, and I'm almost done with the sculpting on the Harbinger: 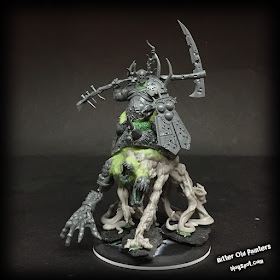 I particularly like the gross spine sticking out of his back: 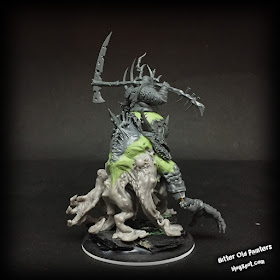 I've also decided against using the necromancer model for the sorcerer on top of my Glottkin - it needed to much work and was a bit too weedy for a Rotbringer Sorcerer, so I chopped up the Ethrac model and gave him a new arm and head - I'm pretty happy with this version: 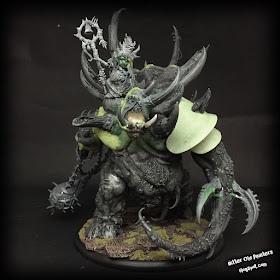 I've also gotten some work done on the Daemon Prince, and he's really starting to come together: 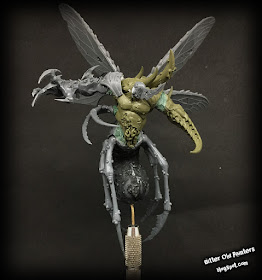 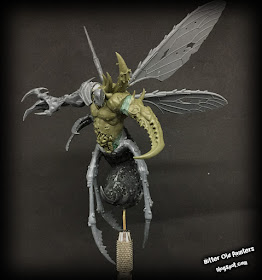 On that note, I'd like to elaborate a bit on conversions. I call this (cue fanfare...):

First of all, I really dislike the word kitbashing; I feel like it belittles the skill and vision required for a cool conversion. A simple weapon swap may be a kitbash, but as soon as you go a bit beyond that, you are basically taking a miniature and converting it into something else, something that better suits your vision of the universe it is being part of. I don't mean to sound snooty or anything, and I'm not suggesting it should be called art, but take some credit in your skill and vision, and stop calling it kitbashing.

The Skaven Grey Seer model is an example of great composition:

The model, seen as a silhouette, has a nice flow to it (shown by the green line), clearly defined form and the details don't mess up the shape or pose. I would even argue that seeing it only as a silhouette, you would still be able to guess that it's a skaven based on the pole, the iconic way skaven cloth is modelled and the hunched pose - non warhammer players could probably guess that it is a wizard, based on the stretched out hand.

Wulfrik the Wanderer, on the other hand, is a walking composition disaster:

Based on the silhouette, you would probably guess that it is some sort of christmas tree with a scarecrow added and a sword sticking out. There is no flow, no shape, no pose - it just doesn't work. The fact that the sculptor seemingly dipped it in glue and rolled it in his box of skulls only seems to make the issue worse.

My Daemon Prince has (at least I think) a pretty good composition: 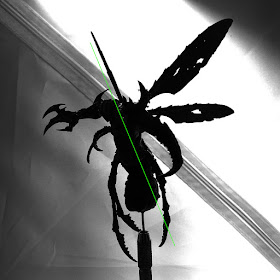 You can clearly see the fly wings, the fly legs, and it has some nasty claws and spikes sticking out, adding to the creepiness and wrongness of the thing. It has a good flow and the body parts don't mess up the composition.


The cure for bad conversion composition:

My advice to any converter is: Get the basic composition in place before you do anything else. The best tool for any converter is holding a miniature up against a lamp to backlit it. You will immediately see the silhouette of the conversion and thereby the composition (again, shape and pose) will jump out.

Don't be afraid to tweak the posing just tiny bits - sometimes moving an arm a few degrees will change to composition completely. Using bluetac or brass pinning wire is great for this - you can change it be moving the part attached with bluetac or bending the brass wire.

Another trick, in lieu of having a backlit setup (and which I use most of the time) is to just squint your eyes - it works almost as good. Again the silhoutte will jump out. Another good tip is to use your camera phone to take some quick pics of the pose, once you find one that works - even if you're tweaking it more, to see if it can get even better, you now have some pics to return it to it's original state.

Once the basic composition is good, you can start adding details and textures, but ONLY if they add to the conversion. Remember to check the silhouette regularly to see if it is starting to get cluttered, and be willing to remove parts again, even if you think a particular part is really cool. Don't be afraid to "kill your darlings" or rip something apart and start over. It is bit like cooking - you're free to use spices, but even the best spices won't make up for a dish that is basically lacking. Many conversions I see on my google search journeys are using way too many bits and lacking basic composition - try googling "obliterator conversion" for example; I've lost track of the times I've seen a plastic chaos terminator that looks like it's been dipped in glue and rolled in a guns bits box. Get the basic pose right, even if it takes some tries - walk away from it, sleep on it, get back to it, and make it the best you can. Good luck! :)