The humble beginnings of a battlefield.

"Okay, he's lost his marbles - he started converting terrain too?"

Yup, never one to leave a model stock, I have gotten my dirty mittens on some of the old Warhammer terrain during the past year or two, and while they are great looking, I thought it would be a bit boring to have duplicates. Also, with the coming of AoS, and round bases (= no movement trays) actual interaction with the terrain (besides just marching around it) became a possibility - thus, I wanted to create more levels, and more options for positioning. Plus, I just like cutting up plastic. ;)

First up is my fortified manor - I've combined it with the Ruins of Osgiliath (LoTR kit, which I used for the others as well), and put another chapel on top of the watchtower, along with the outhouse mounted on the roof. The cliffs are pet shop cork bark (man, it reeked of pet shop - I needed to air it for a few days before actually working on it) hot glued on. 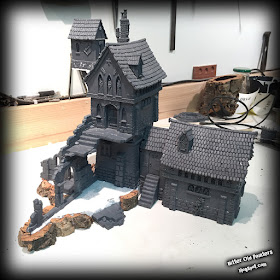 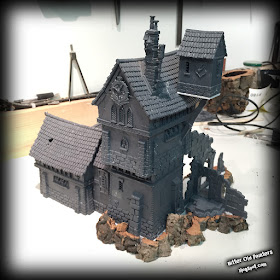 Next, a watchtower - I think the wall with the iron gate is from the Garden of Morr, I got it in a bulk terrain buy. More ruins, a walkway and a creepy tunnel below the ramshackle walkway. Perhaps a tentacle peeking out is needed? 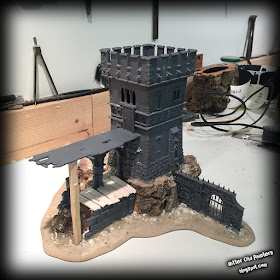 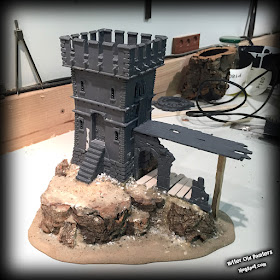 My precious Skullvane Manse, bought as soon as they became available again - the only modification  it'll get is the white clay I'm sculpting over the old "winged warrior skeleton stone carving thing", since I thought it looked really bad. 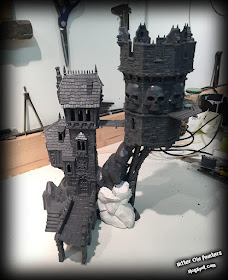 Another watchtower ruin, again Ruins of Osgiliath and some cork bark. 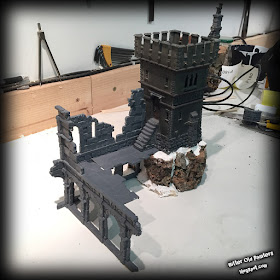 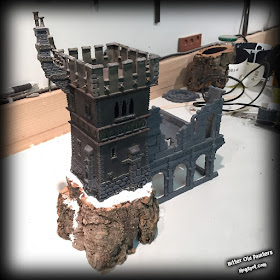 I need to figure out what to do for the basing though - the first watchtower is based, but it was a serious struggle to get the 3 mm MDF to stop warping. I've tried different stuff, plasticard seems to warp too from the PVA glue I'm using, and I don't really want to use 6 mm mdf - it seems to thick. Any ideas?
GuitaRasmus at 01:23
Share